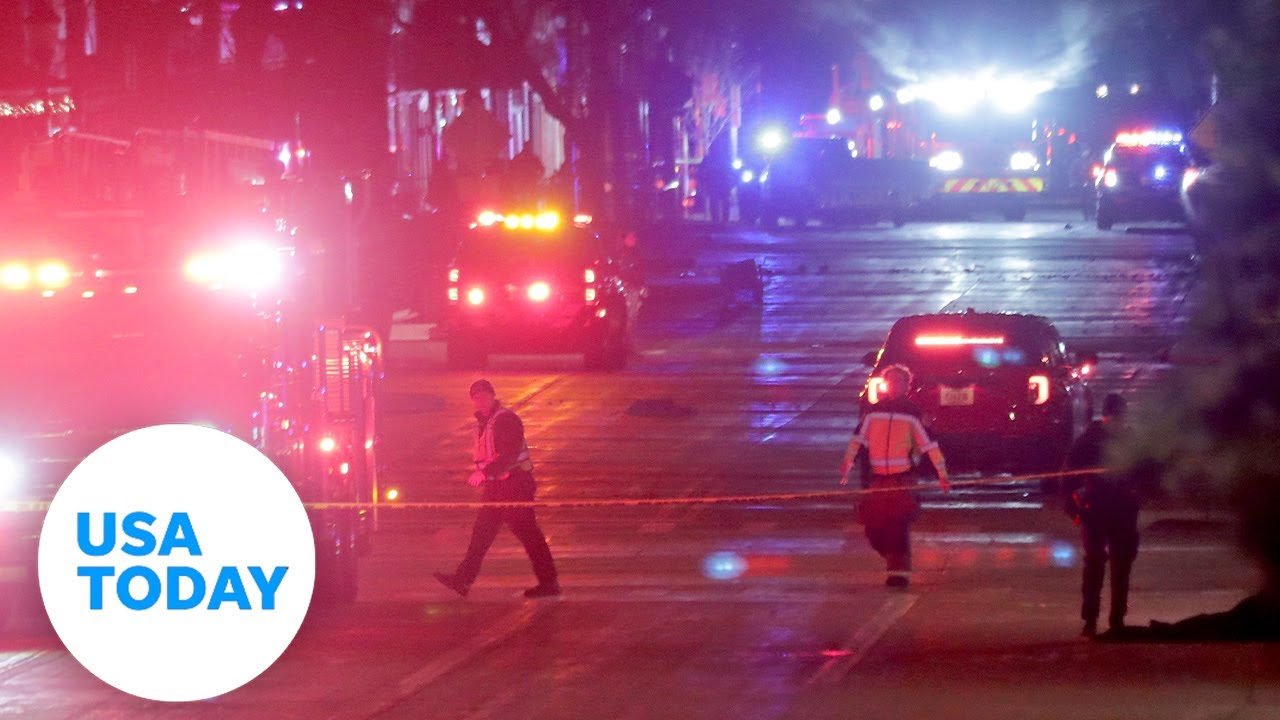 WAUKESHA, Wis. — Authorities were determining Monday whether the driver of an SUV that hurtled through a barricade and slammed into a Christmas parade in suburban Waukesha on Sunday, killing at least five people and injuring more than 40, may have been fleeing another crime.

At least six children remain in critical condition after the car rammed through the parade, striking a high school band, children’s dance group and the Milwaukee Dancing Grannies. The city’s livestream captured the stunning video of the crash, and Waukesha Police Chief Dan Thompson said the number of dead and injured could change because many people took themselves to hospitals in the chaotic minutes after the tragedy.

Children’s Wisconsin Hospital received 18 patients from the ages of 3 to 16, including three sets of siblings, doctors say.

“Today we experienced a horrible, senseless tragedy. I walked in the parade at the beginning,” Waukesha Mayor Shawn Reilly said at a news conference. “I saw the happy children sitting on the curb. I saw happy parents behind their children. I can still see the smiling faces.”

Gov. Tony Evers ordered that flags be flown at half staff Monday and on the days when funerals for the victims take place. Evers said he and wife, Kathy, were “praying for Waukesha tonight and all the kids, families, and community members affected by this senseless act.” The city of Waukesha said it would hold an interfaith prayer vigil Monday.

Who was the driver of the SUV?

Thompson said the investigation was ongoing and that a “suspect vehicle” was recovered. A person of interest was in custody, he said. Darrell Brooks Jr., 39, a Milwaukee man with an open court case related to domestic violence, was  the man taken into custody, according to a law enforcement source with firsthand knowledge of the situation. Brooks has been charged three times in less than two years with recklessly endangering the safety of others, most recently on Nov. 5 as part of a domestic abuse incident for which he was also charged with resisting or obstructing an officer.

In the most recent case, a woman told police Brooks purposefully ran her over with his vehicle while she was walking through a gas station parking lot after he had followed her there after a fight, according to the criminal complaint. The woman was hospitalized, court records show.

Brooks was released from jail on Friday after posting bond in the recent incident, according to court records. He also was charged in July 2020 with two felony counts of second-degree recklessly endangering the safety of others using a dangerous weapon. Both cases are ongoing.

The Milwaukee County District Attorney’s Office said it has launched an internal review of its “inappropriately low” bail recommendation in the recent domestic violence related case. Brooks posted a $1,000 bond, according to the Milwaukee County Sheriff’s Office.

What was the motive?

Authorities have have not publicly disclosed what they believe was the man’s motivation. One law enforcement source told the Milwaukee Journal Sentinel the man had been involved in an earlier incident on Sunday, possibly also related to domestic abuse, just before the parade carnage occurred.

What happened at the parade?

Waukesha, a city of 72,000 people just 20 miles west of Milwaukee, was celebrating the holidays with a holiday parade when disaster struck at about 4:39 p.m. local time. Angelito Tenorio, a West Allis alderman, said he had just finished marching in the parade with his family and friends before he saw the car drive through the parade.

Was there a shooting involved?

A police officer fired gunshots at the SUV in an attempt to stop it, Thompson said. No bystanders were injured by the gunfire. He said police don’t believe any shots were fired from the SUV.

The Milwaukee Dancing Grannies, according to their website, was formed in 1984 and meet once a week to practice routines “for summer and winter parades.” Members range in age from their early 50s to mid-70s and are all grandmothers. The group published a post after the crash saying members and volunteers “were impacted and we are waiting for word on their conditions.” On Monday, the group posted that some members of their troupe had been killed.

“Those who died were extremely passionate Grannies. Their eyes gleamed … joy of being a Grannie. They were the glue (that) held us together,” the Facebook post said. “Our hearts are heavy at this most difficult time, as more information and updates become available it will be posted. Please keep them their families, friends, the Milwaukee Dancing Grannies and everyone who lives have forever changed in your thoughts and prayers.”

At least 18 children treated at hospital

Area hospitals were still treating victims Monday while questions remain about the exact number of injured or deceased.

Those injured suffered serious head injuries, broken bones and scrapes on their faces; six people were operated on Sunday night and two more were in surgery on Monday.

In addition to the six children in critical condition, three others remained in serious condition.

Aurora Medical Center–Summit, a hospital in Waukesha County, confirmed it was treating 13 patients early Monday. Of those 13, three people are in “critical” condition, four are in “serious” condition and six are in “fair” condition, according to a statement released by the hospital, which is located about 15 miles away from the scene of the tragedy.

“We are praying for all those impacted, their families and our first responders,” the statement said.

Staff at Children’s Wisconsin said the hospital helped treat a total of 18 kids who were injured at the parade.

Corey Montiho, a Waukesha school district board member, said his daughter’s dance team was hit by the SUV. “They were pom-poms and shoes and spilled hot chocolate everywhere. I had to go from one crumpled body to the other to find my daughter,” he said.

He said his wife and two daughters were almost hit.

“My family is safe but many are not. I held one little girl’s head in my hand, she was seizing and she was bleeding out of her ears. I held her mother as she collapsed. Please pray.”

President Joe Biden on Monday addressed the tragedy, saying, “An entire community is struggling to cope with the horrific act of violence.”

Biden said his administration was monitoring the situations closely and that he and his family were praying for those affected.

“Our team is in close touch with local officials to offer any support and assistance needed,” White House press secretary Jen Psaki tweeted. “Our hearts are with the families and the entire community.”

The Green Bay Packers released a statement Sunday saying the team’s thoughts were with the Waukesha community and “those affected by the terrible, senseless act that took place at the holiday parade.”

“We are grateful for the first responders and others who assisted the injured and comforted those in need,” the statement continued. “We share our condolences with those who lost loved ones. As a statewide community, we must all come together to support each other in these difficult times.”

Texas has restored its ban on abortion. It's 'chaos' for patients,...

The storm that ravaged Hawaii with its wild winds and flooding...

Northern lights could be 'a great show' in some states this...

Lester Blair - December 27, 2021 0
On Monday, snow and rain continue to wash a large portion of the West while holiday heat waves swept through parts of the...

Two Marines were killed and 17 others injured in a North...

Overnight, hundreds of motorists remained stuck along I-95 for 50 miles...

Hugest case of human trafficking in Ohio history nets 161, with...

Overnight, hundreds of motorists remained stuck along I-95 for 50 miles...